Brent Converse, the plant engineer at Old Dominion Electric Cooperative’s Wildcat Point Generation Facility, has three decades of experience in the operation and maintenance of powerplant equipment—including advanced-class gas and steam turbines. Among the most important lessons Converse has learned over his career: “Stay ahead of the curve” on things having a significant impact on reliability and performance, and pay close attention to detail.

The editors asked Converse to share an example during a telephone interview. He chose the lube- and hydraulic-oil conditioning systems for his plant’s three turbine/generators. Background: Wildcat Point’s Mitsubishi Power 501GAC gas turbines have separate sumps for control and lube oil—the former 150 gal, the latter about 6900. Both systems are charged with Idemitsu’s Daphne Super Turbine Oil MG32.

The Alstom steamer has a nominal 6600-gal combination sump for control and lube oil; the Alstom hydrogen-cooled generator a separate sump for seal oil. The fluid common to both systems is Mobil DTE 746. 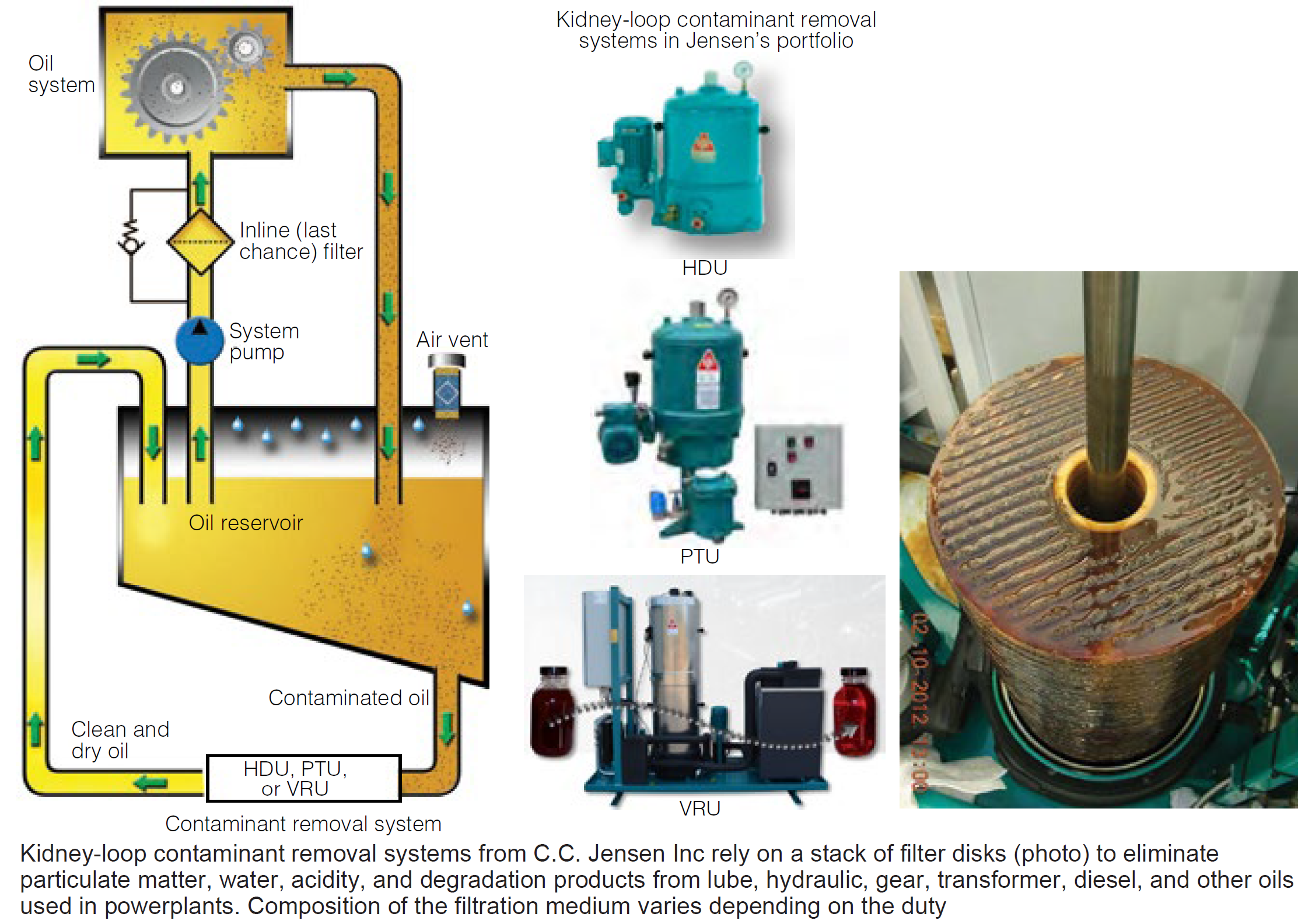 The plant engineer monitors control oil quarterly, judging its condition primarily based on the results of RPVOT, RULER, and acid-number tests. The HDU can mitigate fluid degradation conducive to the formation of acids and insoluble oxidation products that could impede the operation of components critical to turbine control.

However, antioxidant depletion makes it necessary to replace control oil every two years, or so. “Having had no unit trips attributed to control/lube-oil issues since commissioning, such attention to detail has paid dividends,” says Converse.

The plant engineer’s familiarity with the Jensen system was a catalyst for a discussion with the company’s technical manager, Axel Wegner, at a user group meeting. The result was two-fold: Installation of Jensen’s varnish removal unit (VRU) on both gas turbines and its PTU-type Filter Separator on the steam turbine.

More recently an HDU-type Fine Filter, similar to that serving the gas-turbine control-oil system, was installed on the ST generator seal oil system. The major difference between the two is that the latter is explosion-proof.

Why kidney loop. Kidney loop or offline filters benefit users because they are independent of the fluid system and always in service at an optimal flow rate—thereby avoiding pressure fluctuations and other disturbances that might otherwise negatively impact rotating equipment. Plus, they achieve very fine filtration. As the illustration shows, turbine fluids are withdrawn from the lowest point in the oil reservoir, removing sediment in the process.

All of the Jensen offline filters installed at Wildcat Point—HDU, PTU, and VRU—are arranged in this manner. Likewise, all are designed to (1) remove particles 3 microns absolute and larger, (2) absorb up to 1 gal of water per filter insert, and (3) remove insoluble varnish. This performance is achieved by a stack of two or more filter inserts, such as those shown in the photo, made primarily of compressed wood cellulose and cotton linters.

Composition of the filter inserts may vary from the standard Jensen offering where special requirements warrant. This has not been necessary at Wildcat Point. Wegner notes that independent laboratory tests show the Jensen filter inserts do not affect the phenolic and aminic antioxidant additive packages typically used in hydraulic/lube oil formulations used in powerplants.

Applications. The HDU and its standard filter insert are designed for use in applications except where water ingress is expected. Special inserts are available for acidity reduction, dissolved-water removal, and soluble-varnish removal.

The PTU is used mostly with steam-turbine lube-oil systems (and diesel-oil filtration systems) because of its ability to remove large quantities of water from the turbine fluid and discharge it automatically.

Wegner says the PTU has advantages over dehydrators often used in ST control- and lube-oil systems for this application—including lower capital and operating costs, ability to remove particulates and varnish, and faster water removal. However, dehydrators may be beneficial in systems charged with fluids having poor demulsibility (don’t shed water easily). Centrifuges, a third alternative for water removal, are limited in their ability to work reliably over long periods and to reduce moisture levels to the 20 ppm often recommended today.

Jensen’s VRU typically serves on large gas and steam turbines where large amounts of soluble varnish must be removed from lube oil. A specially designed filter insert removes dissolved and suspended soft contaminants by polar attraction and alerts on varnish saturation by high pressure. The varnish-free oil produced cleans all system components it comes in contact with, ultimately reducing the level of varnish in the full charge of fluid to near zero.

Jensen recommends that its filtration systems run 24/7/365 and that the filter inserts be changed annually, when the pressure drop across the filter exceeds the recommended limit, or when oil analysis requires a change—whichever comes first.

A high pressure drop requiring new filter inserts can be caused by a leak exceeding the water holding capacity of the filter or by a high concentration of particulates in the turbine fluid. Wear and tear of mating parts and rusting of carbon steel components—such as the oil reservoir—contribute to the latter. Wildcat Point avoids rust to the degree possible with oil sumps made of stainless steel.

Regarding control of particulates, Wegner says that begins when the oil is purchased. He urges filtering new oil or specifying a required ISO cleanliness level at that time to avoid receiving a fluid that may be dirtier than that called for by manufacturers of servos and other hydraulic control components. Based on his experience, you can expect an average contamination level of about 19/17/14 unless you write a tighter spec.

Jensen changes out filter elements annually and performs all PMs called for in its O&M instructions. Any interim issues are responded to in timely fashion and there have been no delays in service and in the receipt of necessary parts. As noted earlier, “no failed starts” is the objective and the fluid systems for the principal rotating equipment at Wildcat Point continue to meet these expectations.