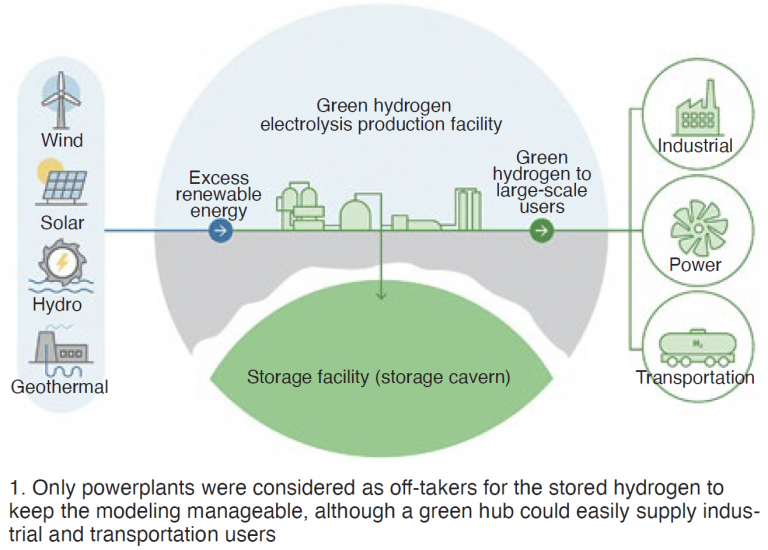 In a webinar August 12, experts from Mitsubishi Power Americas (MPA) shared a first-order long-term modeling exercise which showed that a centralized hydrogen storage facility and hydrogen-fueled prime movers can economically avoid having to curtail wind and solar energy in the Western Electricity Coordinating Council (WECC) and improve carbon footprint even further than a baseline case.

The modelers acknowledged this type of modeling is a challenge: “WECC has 6000 generating units,” one said. Also, as with all models and forecasts, there are numerous assumptions, including resource costs and electricity demand far into the future, policy frameworks to support decarbonization, and how much renewable energy would actually have to be curtailed.

The so-called “Green H2 Hub” includes massive underground salt caverns (Fig 1), capable of storing up to 150 GWh of hydrogen, produced by 1000 MW of electrolysis units during the winter/spring shoulder months, and available to burn in gas turbine/generators during summer peaks.

In 2050, the need for firm “green” capacity is evident (Fig 2), said the experts. The basic concept is a double bang for the buck—don’t waste carbon-free renewable megawatt-hours because of curtailments, and reduce emissions by burning renewables-derived hydrogen (so-called green hydrogen) instead of natural gas. This long-term storage concept was distinguished from short-term storage using battery-based systems, although MPA also supplies battery systems. 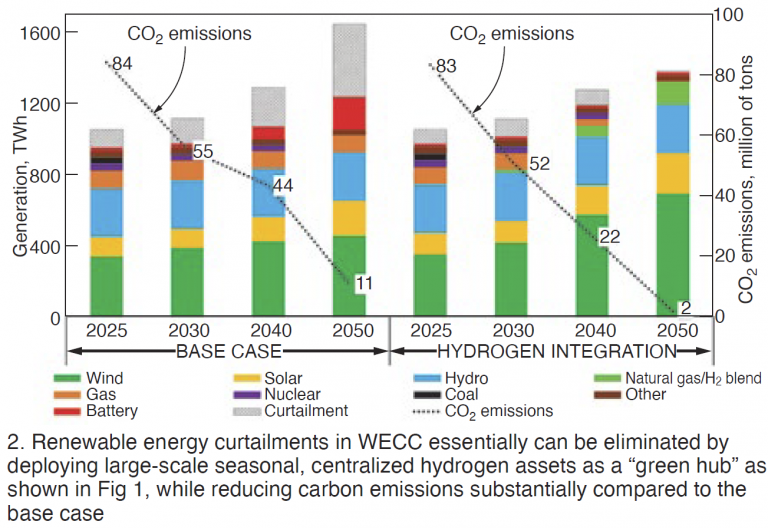 The model also showed that overbuilding wind to solar was optimum.

The Q&A session illuminated these points:

MPA also took the opportunity to highlight recent accomplishments and projects, including the Advanced Clean Energy Project in Utah, in collaboration with Magnum Development, based on the green hydrogen hub concept; adding 200 MW of battery storage to the Texas grid; J-Power’s 1200-MW Jackson Generating Station in Illinois, a 2 × 1 J-class combined cycle said to be among the world’s most efficient power producers and lowest carbon emitters; and the addition of J-class gas turbines at the coal-fired Intermountain Power Plant in Delta, Utah, which will be an off-taker of hydrogen from the Magnum/Mitsubishi storage facility.