For gas-turbine-plant owner/operators, Highview Power Storage Inc’s grid-scale storage system at least looks and acts like the kind of power system you’re already familiar with. It’s called CRYOBattery™, and is based on the compression and expansion of the most common fluid around—air.

Unlike lithium-ion and other solid-state batteries, some flow batteries, and flywheels, CRYOBattery is specifically designed for long-term storage, and is expected to compete with pumped-hydroelectric and proposed compressed-air energy-storage technologies. From that perspective, one of CRYOBattery’s notable attributes is it does not introduce any technical risks that are unfamiliar to power and process systems engineers.

Dry air with no combustion drives the turbine/generator (a compressor in the figure). To reduce the size of vessels and pipes, the air is cryogenically cooled, compressed, and stored as a liquid in well-insulated tanks at temperatures approaching -320F, similar to what is done in large-scale air separation plants to produce oxygen and nitrogen gases at high volume. 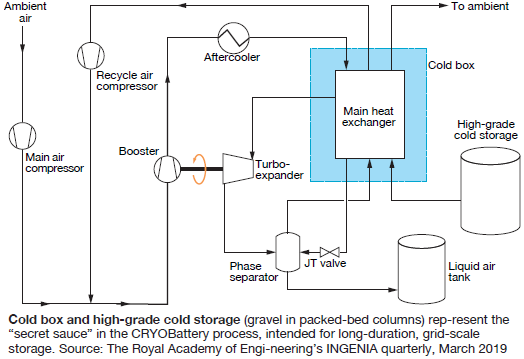 According to Highview Power’s CEO Javier Cavada, the system is designed for storage discharge durations from five to 20 hours and the typical initial plant sizes will be 50 MW, or assuming an eight-hour discharge, 400 MWh. Larger facilities will be built by duplicating this basic unit size.

The first of two most attractive “use cases” at this time is firming-up of wind and solar power. For example, Cavada believes his technology can compete with gas-fired combined cycles “chasing the wind.” The other use case is providing grid ancillary services—such as spinning reserve, reactive power, voltage support, and others.

The technology was pilot-tested in the UK at a 5-MW/15-MWh facility integrated with an engine-based landfill-gas generating plant. Encore Renewable Energy, Burlington, Vt, and Highview announced in December that they are developing a minimum 50-MW/400-MWh facility to “resolve the longstanding electricity transmission challenges surrounding the state’s Sheffield-Highgate Export Interface.” A 50-MW/250-MWh facility is being built in the UK.

The proprietary elements of the technology, or “secret sauce,” involves what Highview calls the “high-grade cold storage,” which raises the round-trip, or overall charge/discharge, efficiency of the process. According to Cavada, Highview Power’s IP “consists of a combination of process and cycle innovations as well as technical and operational knowhow, captured in our proprietary BLU controller.”

CRYOBattery employs gravel-filled vessels (packed-bed columns in chemical engineering parlance) as the cold storage medium because it allows very high energy density, which is derived from the material’s specific heat capacity and physical density. Gravel can also withstand thermal and hydrostatic stresses and is low-cost, as detailed in an article entitled “A New Contender for Energy Storage” published in The Royal Academy of Engineering’s INGENIA quarterly.

Cavada puts the round-trip efficiency at 60% minimum but says the system can be designed for higher efficiency but that leads to a higher capital cost. Because CRYOBattery can make use of waste heat, it can also be considered, as other grid-scale technologies are, in hybrid plant designs. Covada said, “400F waste heat is good, 800F is great, although volumetric flow is as, if not more, important.”

CRYOBattery plants require no water and they are said to discharge air cleaner than they take in for the process. One of the guiding principles of system designers has been to use only industrial grade, proven components.