It happens to all of us. One day we wake up and realize, we’re not young anymore. You can, in the same breath, decide you need to do some things differently. Or, you can ignore it, and pay a larger price later.

The same thing is true with heat-recovery steam generators (HRSGs). Combined-cycle plants experienced the equivalent of the post WWII “baby boom” between 2000 and 2005 (Fig 1). These units are now in or approaching the second half of their 25-30-year design life. 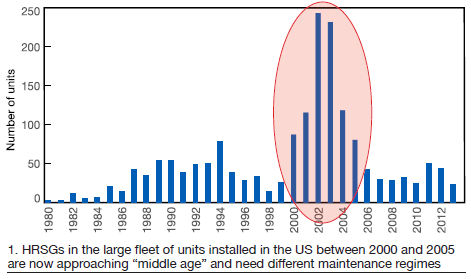 The need to acknowledge this reality and plan accordingly was considered important enough that the Combined Cycle Users Group (CCUG), at its 2017 conference in Phoenix at the end of August, devoted the better part of a morning to the subject so that experts from HRST Inc could identify some the problems users could experience and possible solutions.

At an industry level, Bryan Craig noted that the general goal is to plan for and avoid similar ageing problems experienced with the fleet of fossil-fired boilers installed a generation earlier. The range of issues presented, and the photographic evidence from operating units, in the HRST slides is so extensive that users are strongly encouraged to access the original presentations. This article gives some highlights.

Like many fossil units, combined cycles often operate in ways not designed for—that is, less baseload and more cycling and dispatch. Some of the original design materials and methods may be questionable as well.

Creep and overheat damage in superheater and reheater tubes is the first problem Craig tackled. Most tube overheat incidences occur downstream of the duct burner and are caused by flame impingement. Flames should never make contact with tube metal yet they often do. Rules-of-thumb for flames are that they should be 6-10 ft long, they should be independent and separated, and reach one-half to two-thirds down the firing duct.

While users should view flames at least once daily, and preferably once per shift, through the unit’s viewports, a better idea is to install cameras in the firing duct on the walls, floor, and/or ceiling and wirelessly transmit the images to screens in the control room. Damage is often worse in areas difficult to view through the casing ports.

Up next were duct-burner problems, notably baffle sagging, cracking, and fluttering; flame-holder failures; coking; burner-nozzle cracking; and flow-distribution equipment failure. In the case of baffles, for example, they often sag under their own weight as the radiant heat weakens the metal. Because they also provide horizontal and vertical support to the burner elements, weakness in the baffles causes problems in the burners, such as fatigue cracks. Fig 2 illustrates the some of the issues with one type of burner and vintage, and the fix HRST has implemented. 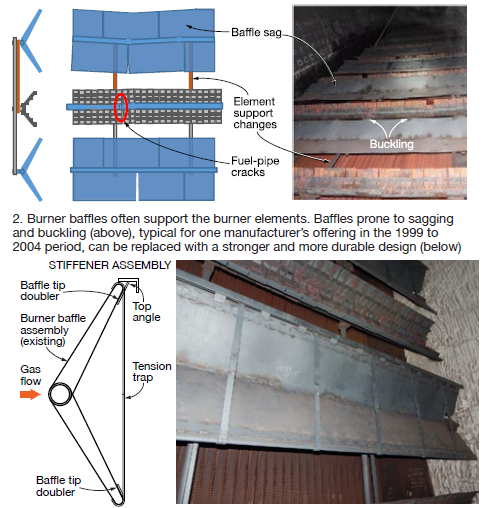 Casings experience cracking and corrosion problems at the roof because of numerous piping penetrations, and on the sides where temperatures generally above 800F may exist. Unrepaired casing cracks can lead to graphitization and more extensive repair work. Of course, any cracks, especially in the roof, lead to rainwater ingress and insulation failures, which only compound problems with internal surface corrosion.

In the duct-firing area, there’s more insulation to protect against higher temperatures. However, when the burners are not running, this becomes the coldest area of the casing. If the temperature dips below the exhaust gas dewpoint, acidic condensation may occur, leading to rare cases of stress-corrosion cracking. High NOx environments, units with no SCR for example, are especially prone to SCC.

Ageing problems in economizers. Craig focused on the return-bend style of economizer design (different from panelized economizers). Much of the economizer’s weight is supported by the return bends, making them prone to corrosion fatigue. Startup thermal shock aggravates the situation. To address this, HRST has developed a retrofit support system that avoids any new pressure parts.

Craig offered suggestions and more robust inspection, testing, and assessments for addressing high-pressure evaporator waterside deposits and high-temperature piping. The API 579/ASME FFS-1 specification to assess “fitness for service” and remaining life should be considered for high-temperature piping. He noted that a “high percentage of welds being tested are problems.” For areas prone to corrosion under insulation, Craig suggested retrofitting vents and drains.