Large-scale battery energy storage systems (BESS) continue to demonstrate their ability to meet specific functional requirements of grid operations and management under a variety of business models and ambient conditions. Los Angeles Department of Water and Power (Ladwp) is the latest to add a BESS, primarily for transmission-line stability. It follows several recent projects with distinctly different primary functions.

Two years ago, Southern California Edison added a large BESS to its Center Peaker Facility. Its primary function is to capitalize on pricing for spinning-reserve capacity in the CAISO market. While the gas turbine/generator proceeds through its start sequence, the BESS delivers power immediately. The BESS also takes load swings while the turbine operates at maximum output, its most efficient and lowest emissions operating point.

SCE is credited with pioneering the first application of a fully integrated, hybrid BESS/LM6000 peaking facility. Just before that project began operating, the Village of Minster (Ohio) brought a 4.2-MW solar PV facility online paired with a 7-MW/3-MHh BESS primarily for power-factor control, peak-load management, and Reg D frequency regulation in the PJM market. Minster purchases all of these “services” and owns none of the equipment.

T-line stability. Last October, Ladwp brought a 20 MW/10 MWh BESS online down the road from a substation which takes 34.5 kV power, collected from 570 MW of solar PV in the area, and converts it to 230 kV for a long transmission line that takes the power to LA (Fig 1). The Beacon Solar + BESS earned recognition from the American Society of Civil Engineers (ASCE) as an Outstanding Energy Project. 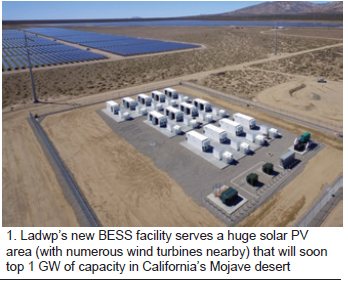 Unlike Center and Minster, the primary function of the Beacon BESS is T-line frequency control and voltage regulation, with a secondary purpose of load following during the daily transition late in the day from sunlight to dusk as the utility’s afternoon peak demand begins to ramp up.

According to Ladwp’s Tom Honles, power engineering manager, in its first six months of operation, the BESS has successfully demonstrated its daily load-following function from 6 pm to 8 pm, discharging from a full state of charge to minimum state of charge at a programmed ramp rate of 5 MWh per hour. If necessary, the utility’s control center can dispatch the full 10 MWh of energy in a half hour or less.

Perhaps as importantly, the BESS has been shown to accommodate the extreme weather variations in the area, having operated through both sub-freezing and 120F ambient temperatures. The Mojave is among the harshest climates, in terms of extremes, in the continental US.

Utility grade. Experienced utility engineers will recognize a “utility mentality” in the design of this BESS. For example, there are redundant battery stacks to allow for scheduled maintenance outages and lifecycle cell degradation. While the plant requires 12 containerized battery units to meet rated load, a thirteenth was added for reliability and redundancy. Each container also includes redundant air conditioning systems; two HVAC fans are visible on each end (Fig 2). Each cooling system is “alarmed” as well.

Battery thermal management is always critical for a BESS but in the desert, even more so. To ensure that those a/c systems operate in the event of a complete loss of grid power in the area, a Cummins 180-kW (200-kW standby) turbocharged diesel/generator was incorporated into facility design. Seven days of fuel onsite is available to keep the containers cool (Fig 3). The engine was sized based on the a/c load, which gives you an idea of the parasitic load taken for thermal management.

The battery control system is integrated into the complex of battery enclosures, with redundant failover intelligent controllers, while the operator console and system protection reside at the substation control house about a half mile down the road. The ac substation also has seven-day backup engine/generator capability to support both the solar array and energy storage.

Samsung SDI supplied the lithium-ion batteries/inverters. Fire protection is integrated into each box. The inverters are designed to meet PRC24 code for low-voltage ride-through.

Temperature has such a huge impact on batteries that, according to Honles, the components had to be sequenced and shipped to the site to minimize ground storage time. Otherwise, it could affect lifecycle performance.

As another precaution, the entire site is electrically grounded, since Li-ion batteries are “always hot,” says Honles.

A thousand words. A picture of the area offers a glimpse into what Ladwp has to manage but a visit puts it in stark terms. One sees on the drive up to the facility endless wind turbine/generators as you get within 10-15 miles of Beacon. Then when you take the turn off the main highway into the Ladwp grounds, it’s nothing but endless solar PV arrays. Honles notes that in a few years, more than a gigawatt of solar PV will be operating in the vicinity of the BESS.

Clearly, it is a remote location, but the BESS isn’t expected to need much attention. O&M procedures include maintenance of the critical cooling systems for the containers; replacement of a/c filters, something most homeowners can relate to; and semi-annual battery inspections.

Startup issues focused mostly on the power converter systems (PCS) and the battery controllers, but were of the typical mean-time-between-failures (MTBF) bathtub curve variety, notes Honles, and were experienced in the first three weeks of contractually stipulated performance testing, prior to declaring acceptance into commercial operation.

The BESS went through extensive testing in all three performance modes (frequency control, voltage control, peak-power delivery) prior to acceptance. Each battery rack had to do one full charge/discharge cycle each day for 90 days and do this 95% of the time (95% reliability guarantee, 99% availability).

Software allows three selectable operating modes. Frequency control has priority most of the day. At 6 pm, the software automatically switches into discharge cycle, and empties 100% each day from maximum state of charge (SOC) to minimum SOC. The final mode is to soften the solar ramp out at the end of the day as the sun goes down. The BESS was exercised in all of these modes during the performance tests.

The controls and communications architecture is often the greatest challenge with a large-scale BESS. Each battery cell has to be monitored and managed with tens of thousands of others, a task relegated to the battery supplier and its optimized battery controller electronics.

Then the battery system has to be integrated with the dc/ac PCS and inverters. The PCS’s ac connection is matched with corresponding harmonic-rated ac step-up transformers to match the medium voltage of the plant. The BESS may be integrated with a solar PV plant, such as that at Beacon, and through a utility substation, stepped up to a high voltage and interconnected to the transmission system. Entire facility requires control and communication with the utility Scada system.

To handle all this, Ladwp specified an open standard, and accepted in the system integrator’s proposal, the Modular Energy Storage Architecture (MESA), a communications protocol which, says Honles, includes a wide set of available data points, and flexibility with other storage configurations. While MESA was developed primarily for distributed energy resources, Ladwp adapted it to its needs by adopting a reduced set of data points necessary for the utility-type operations of their ECC.

Commercial terms. The BESS and balance of plant cost $17.5-million, almost $2-million less than the not-to-exceed authorization from the Ladwp Board. Total cost, including site development and interconnection, was around $23-million. However, it is important to note that the project was driven by the state’s AB2514 storage mandate, not an investment-grade payback, and to demonstrate the ability to serve as a reliability-enhancement asset.

Regarding the latter, Honles notes, the other options would have been (1) a static VAR compensator or (2) load shedding and curtailment of solar capacity on the transmission line. Neither would have provided a peak demand solution, however.

Storage in context. Finally, while this facility is large in the scheme of evolving grid-scale storage, it is worth noting that it is minuscule compared to the “big daddy” of storage in Ladwp’s system, the nominal 1300-MW Castaic pumped-storage hydroelectric plant. In this context, BESS has a ways to go. In fact, some power-system engineers estimate that 250 MW of variable generation ultimately needs to be coupled to 100 MW of 4-hr-capable storage to truly provide grid stability.