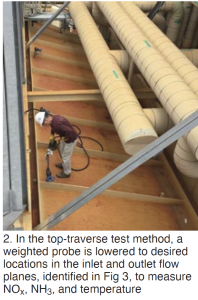 A 480-MW 1 × 1 combined cycle was experiencing NOx emissions above its 2-ppm stack permit limit. The problem was more pronounced with supplementary firing, so the plant was restricted both in its level of duct firing and overall output. This HRSG, which incorporates a heat-recovery section directly upstream of the SCR (the “box” in Fig 1), is of the triple-wide panel design with baffles between the panels.

SCR Solutions LLC was engaged to help the plant determine the cause of the emissions excursion. Principal Consultant Bill Gretta, who specializes in SCR testing and optimization, and AIG (ammonia injection grid) tuning, began his investigation by gathering gas-path data at the catalyst inlet and outlet using the company’s proven top traverse method (Fig 2). Temperature and NOx were measured at 12 elevations via each of the HRSG’s seven roof ports (total of 84 data points), as shown in Fig 3.

Initial results revealed very high NOx (more than 10 ppm) at the SCR outlet in locations directly in line with the baffles separating the tube banks. Temperatures in those same locations exceeded 1000F when duct firing. By contrast, SCR outlet NOx readings in regions away from the baffles, where temperatures typically were about 740F, were generally less than 1 ppm.

Thus, ammonia had to be over-injected to reduce overall stack NOx to permit limits. This led to high ammonia slip and high ammonia consumption (524 lb/hr), and the plant could not maintain its stack NOx limit when duct firing. 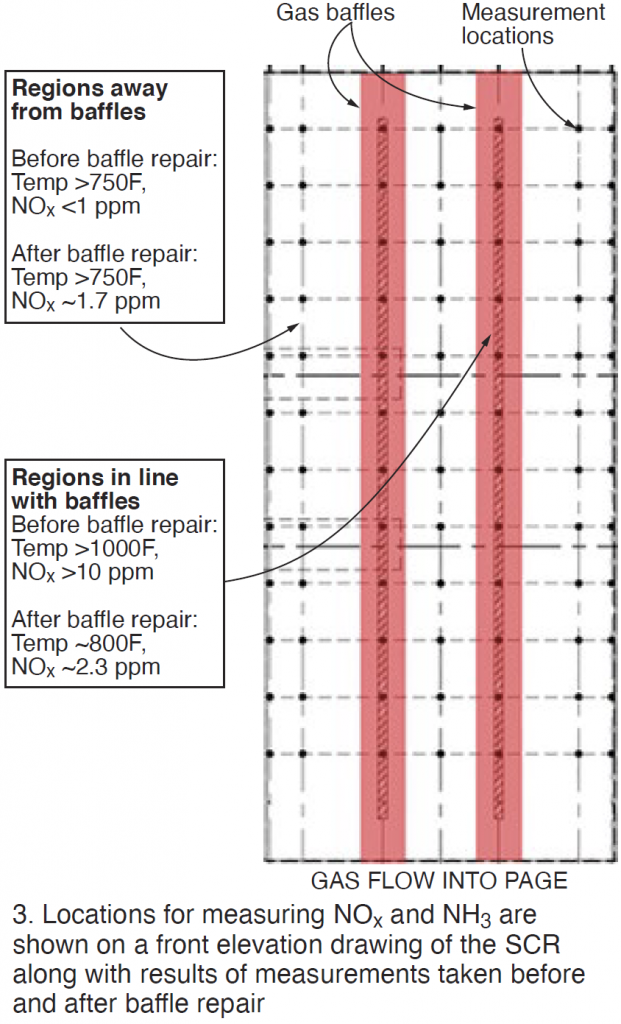 SCR Solutions determined that the baffles were not designed properly and failed. Thermal expansion was a contributing factor. The resultant openings in the failed baffles allowed a significant amount of high-temperature gas to sneak through the box and get to the SCR, damaging some of the catalyst.

The baffles were repaired and testing was repeated in the same locations. As shown in Fig 3, the downstream temperatures in line with the baffles were reduced to about 800F. Important to note is that no changes were made to the system beyond baffle repairs.

NOx values at sampling locations in line with the baffles were closer to the stack average post repairs and typical of NOx values in regions of the catalyst away from the baffles.

Ammonia flow was reduced to 417 lb/hr—a 20% reduction—allowing the plant to operate with duct burners at 100% capacity.