Challenge 1. While CPV Towantic was in the process of its Spill Prevention, Control, and Countermeasure (SPCC) recertification (from the pre-construction initial submission) and was seeking PE certification for the EPA submission, the certifying professional engineer expressed concern with the (1) so-called shed roof around the 1.5-million-gal diesel-oil tank’s secondary containment, and (2) lack of secondary containment around the outdoor fuel-gas condensate collection tanks.

The site’s diesel-fuel tank height is 48 ft with its overflow at approximately 46.5 ft. The secondary containment is designed to hold over 110% of the capacity of the fuel tank, but being of larger circumference is only 41 ft high.

A rain “shed roof” was installed on the skin of the oil tank at elevation 41.7 ft, covering the top of the secondary containment to prevent snow/rain entry. This created a stepped appearance overall of the tank and secondary system, as seen in Fig 2A.

Since administrative controls to solve this were not an acceptable solution to EPA, the site proposed a secondary roofing system. It would span from the top of the tank to the top of the secondary containment (Fig 2B), including alterations in the original shed roof—thereby eliminating the concern. The PE’s company had come across this issue previously and viewed their proposed solution as a more proven choice. The consultancy wanted a cost and risk/benefit analysis performed before signing off on the site’s solution.

Solution 1. Working with the site owners and NAES Compliance (and NAES Safety during design and construction), CPV Towantic was able to provide the required analysis demonstrating that a secondary roofing system was a better option, and the PE agreed to support it. Although this cost nearly $250k to install and commission, the alternative had (1) a much higher spill risk and cost because of the need to relocate the oil, (2) the challenges associated with inerting the tank, and (3) confined-space consideration to allow hot work inside the oil tank (to physically lower the top of the overflow). The overall saving was about three to four times the cost of the secondary roofing system.

In the end, the PE advised on some design elements and was impressed with the completed project, signing-off on the SPCC for EPA submission without further hesitation (Fig 2C). Important: To alleviate safety concerns, the site used bolted construction near the top of the tank in lieu of hot work near the skin of the oil tank. 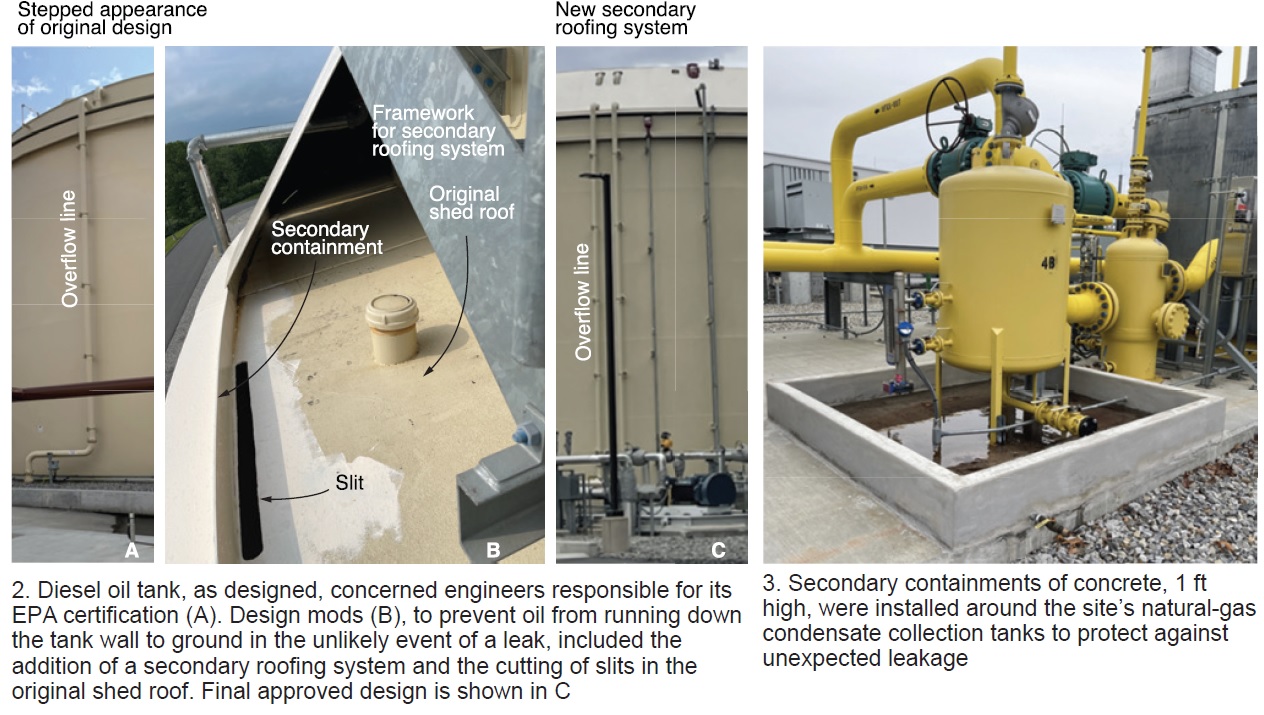 Challenge 2. The original design of gas-turbine drains allowed for spillage of diesel fuel/NOx control water during transitions from natural-gas firing to fuel-oil firing.

Solution 2. Plant personnel fabricated bolt-on funnel extensions to prevent the fuel/water mixture from overwhelming the drain system and causing a state-reportable spill (Fig 4). Note that Connecticut does not currently have language for negligible spills, even onto solid surface, so any transition event has a high probability of being a reportable spill caused by back-up of the fuel/water mixture within the relatively small funnel—depending on the length of the transition stage.

Challenge 3. The condensate-pump pit, located inside the steam-turbine building, is below grade and equipped with a standard staircase (not a ladder) to access the equipment. The pit is not considered a confined space because of the staircase.

However, CPV Towantic management recognizes the below-grade area could potentially collect a hazardous atmosphere, possibly compromising the safety of personnel attempting to operate or maintain equipment there. Since the facility normally operates with only two staff operators, this equipment normally would not be inspected with a third person and atmospheric metering to ensure safety. 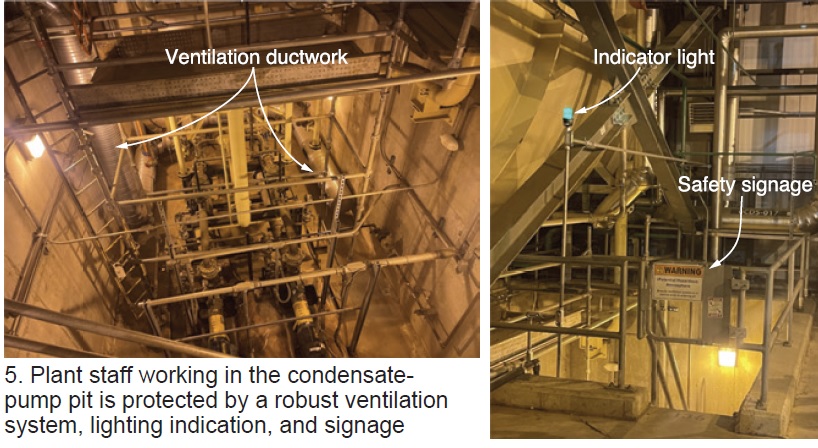 Results 1, 2, 3. The three initiatives described enable the plant to comply with EPA and state regulations, minimize the impact of cost and unnecessary deviation reporting, increase the safety of accessing equipment, and maintain as-designed fuel-storage capacity while assuring operation on oil when required.