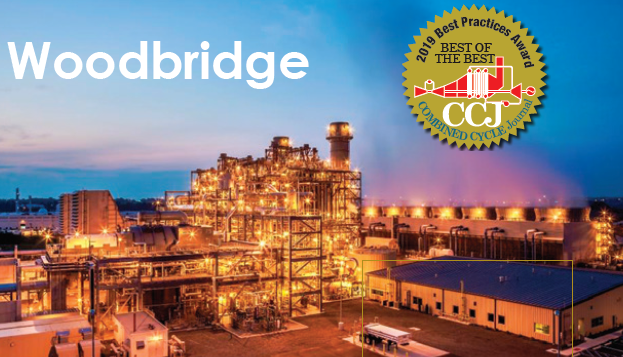 Like any new facility, all of the programs and procedures needed to operate and maintain Woodbridge Energy Center had to be created from scratch. One, the High Energy Piping Program (HEPP), immediately stood out to the plant team as an area that could benefit greatly through customization and simplification. The challenge was how to make a relatively complicated and lengthy program efficient and easy to understand by operations personnel while creating a sense of ownership through participation

HEPPs have two main goals: Safe operation of the site and long-term reliability of the plant’s piping systems. To achieve these goals at Woodbridge, its 22,000 ft of piping was broken down into 495 data points (425 pipe supports and 70 welds). Those data points were then condensed into a form making inspections easy to perform, understand, and track over the life of the site. Typically, this area is where most HEPPs fall short because of the massive amount of data needed for inspection and formatting of the results.

Team Woodbridge decided the first area to go after was the actual inspection form itself. With the goal being a form that was visually easy to follow and understand, Plant Engineer Michael Armstrong took the general arrangement drawings for the different piping systems and added indexed markings showing the location of the hangers (Fig 1) and welds (Fig 2) included in the program. 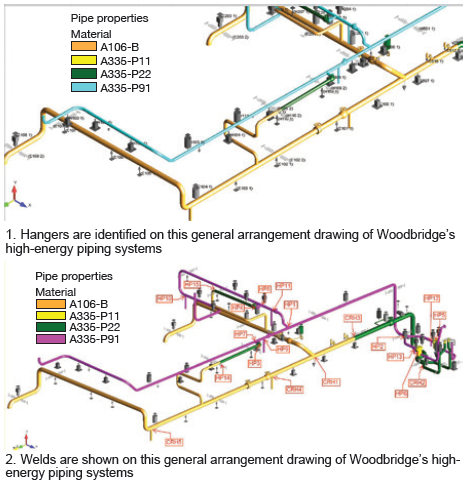 The last hurdle was the clear and concise presentation of the inspection results. A spreadsheet was developed (Fig 3) that listed the index numbers from the referenced drawings along with related design information (pipe size, pipe support ID, growth direction, plus support type, symbol, and stiffness) for each pipe support/hanger. It also included a section for hot readings, cold readings, and comments. 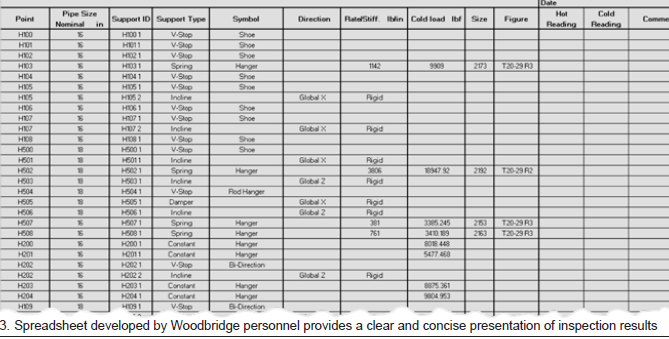 This enabled the individual performing the inspection to take the annotated piping system drawings with the inspection forms and walk down each support/hanger easily and efficiently.

Regarding weld inspections, a similar sheet was developed; however, the site team is not trained to perform the vast array of necessary inspections so the drawings and inspection forms are provided to the third-party contractor prior to starting work.

The bottom line: An otherwise complex program was developed into an efficient and easy-to-understand process that (weld inspections excluded) the team can self-perform. The ability to self-perform the hanger inspections already has proven valuable when issues were discovered by plant staff that likely would have gone unnoticed by contractors not familiar with the site. Being able to catch these problems in-house greatly increased the team’s confidence in its own ability to quickly identify issues without having to comb through multiple levels of contractor-provided documentation.

The 7FA.05 gas turbines at Woodbridge Energy Center were constructed with a new style of hazardous-gas detection system. It uses instrument air and an aspirator to pull air samples from two different compartments on the unit through dedicated LEL (lower explosive limit) sensors.

The LEL sensors have the capability of shutting down the turbine should two sensors in either compartment go into a state of alarm, which is defined as high LEL readings and/or a loss of sample flow through the LEL detector itself. The latter had caused numerous runbacks and required daily attention in order to stop loss-of-flow alarms from coming in constantly.

Initially, one, or both, of the filters installed in each of the sample lines was the suspected cause of the problem. After going through every combination of filter design and mesh, plus a short stint without filters, the issue persisted. Eventually, the opportunity arose to take the entire system offline, allowing the site team enough time to blow high-pressure instrument air back through the sample lines to clear them of any debris left over from construction.

Much to everyone’s surprise, this stopped the alarms from coming in for several months before they slowly started becoming a part of the daily routine once again. At this point, it appeared as though the solution was as simple as a finer mesh sock filter on the end of the sample probe. Unfortunately, that filter was/is not available from the OEM and any attempt by the site team to create its own filter ended with loss-of-flow alarms caused by the inability of the aspirator to create a sufficient amount of vacuum on the system.

Until a better aspirator and/or filter design became available, the solution to the loss-of-flow alarm issue was to blow back the sample lines quarterly. This process is neither quick nor easy given the location of the analyzers and their OEM’s tubing configuration. The analyzers also must be taken out of service for an extended period during this process—not ideal because the unit primarily operates at baseload.

To expedite the process of clearing the sample lines, the plumbing had to be reconfigured. The first step was to bring a permanent source of instrument air to the area just upstream of the particulate filter mounting block. This eliminated the need to run temporary air hoses for the blowback process over extended distances.

Once this air supply was sourced and brought into the area, the OEM-installed compression fittings were removed in favor of a quick-connect style. This allows the technicians to quickly move the lines from their normal line up into the blowback configuration. A ball valve was also installed as a means to block and control the air flow during the blowback process.

After implementing the changes, the blowback process was reduced from a several-hours-long task for each gas turbine to one that takes no more than a few minutes. This reduction in analyzer downtime has allowed the site to perform this work while the plant is in operation with minimal risk of an inadvertent runback.

Lastly, now that the process is quick and easy, it is being performed monthly and has completely eliminated the loss-of-flow alarms that had plagued the site for over two years.

As Woodbridge Energy Center began its third year of commercial operation with a very low turnover rate, it was faced with an unexpected problem in terms of continuing education for staff. After initial training, employees have access to the CAMS Workforce Development Program, which offers a combination of online and hands-on training programs in craft skill areas—such as mechanical, electrical, I&C, and auxiliary operations.

Though most personnel had completed a majority of the training programs, very few had completed all of the training necessary for their Qualification Card. Since Woodbridge is operating at a high capacity factor (nearly baseload), it does not provide sufficient time for learning opportunities that do not interrupt the workflow and routine. Therefore, team members were not able to easily re-engage with training material nor provide additional opportunities for training new hires because of the time constraints.

To address the problems of staff engagement, new-hire training, and the lack of down time, a new training program was introduced: Qualification Card University (QCU). This training program is led by a “professor” (Production Manager Justin Hughes), uses a set class schedule, and provides a group learning atmosphere.

Initially, the class was held for two hours every Friday afternoon with the weekly topic being chosen off of the Auxiliary Operator Qualification Card. The topic was rotated frequently a means to provide fresh and ever-changing content to the team members who already completed their qualifications, or nearly so. It also provided a means of covering a broad range of content areas for recent employees just starting out in the qualification program.

By the end of the first month of QCU classes there was a dramatic increase in class participation, especially during the 20-min open discussion period at the end of the main lesson. This led to a few classes going well beyond the two-hour mark, and it also kick-started the Workforce Development Program to the point that there was a waiting list for employees to perform their final checkout exams for the various craft skill areas.

While both of those results were beyond expectation, the real measure of overall program success came at the end of the year. An extended fall outage forced classes to be put on hold for a few months until the team was surveyed at the year-end safety meeting. Personnel were asked to respond to this question: “What can the management team provide employees to make their careers and overall time at the site better going into 2019?” The overwhelming response to this question: Bring back Qualification Card University.

The program was restarted the second week of January 2019 and has already been expanded (at the plant team’s request) to include topics outside of the written portion of the QCU program—such as hands-on training, “field trips” around the site to various pieces of equipment, and “guest speakers” from the plant team. By blocking out and dedicating two hours each week while also creating a group learning environment for the entire staff, QCU doubled the craft skill area completion rates and reignited the team’s enthusiasm for continued learning.

The review found fire extinguishers without adequate signage and not in the normal path of travel, which created inefficiencies during the monthly inspection process. Furthermore, many extinguishers and inspection tags were exposed to environmental conditions, resulting in degradation over time.

To address the environmental issues and to promote equipment longevity, team members installed covers on each outdoor portable fire extinguisher. They go on over top of the extinguisher, protecting it from weather, cooling-tower plume, etc. The covers are relatively inexpensive ($15 each) and are easily installed and removed via a Velcro strap. The easy removal of each cover allows for quick fire-extinguisher use during times of need. The covers are a bright red color and increase visibility of where each extinguisher is located.

The team also purchased aluminum inspection tags to replace the standard paper inspection tags. Only slightly more expensive than the paper, these tags hold up against wear and tear and help demonstrate compliance during annual fire-protection audits by local authorities.

The team successfully implemented portable fire-extinguisher best practices that strengthened NFPA 10 compliance and improved safety. By rearranging where the fire extinguishers are located in the facility and raising awareness through signage, the team enhanced the visibility of a critical safety resource. This also shortened the time to complete the monthly checklist by one or more man-hours.

Moreover, the team’s effort improves longevity by installing individual covers and changing out inspection tags to something more durable. This project cost less than $1000; payback was projected at six to eight months through equipment resilience and saved man-hours.