Recognized for its Best Practice in Outage Management 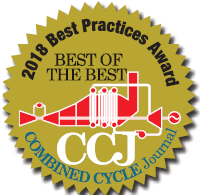 The days of having long-term service agreements (LTSAs) that coexist with power purchase agreements (PPAs) are vanishing. Many of these contracts in older facilities have expired or are approaching expiration. Private-equity firms with stakes in these plants are looking at maximizing their returns on the assets.

Strategic independent power producers (IPPs), such as Hermiston Generating Plant (HGP)—a 2 × 1 F-class combined cycle owned by Perennial Power Holdings and PacifiCorp—want to strike a balance between short-term return and long-term sustainability, while keeping critical infrastructure in a healthy condition. Given parent company support, the greatest impact on returns managed at the plant level is major maintenance. Developing a major maintenance strategy that positively impacted fixed costs was the challenge at HGP.

Shortly after the plant’s LTSA expired with the OEM in 2016, the plant experienced a combustion issue in one of its two gas turbines. A borescope inspection revealed damaged diffusers on several fuel nozzles. The plant management team, led by PM Brad Knight contracted a third-party technical advisor (TA) to assess the issue. Because of time constraints, management decided to “self-perform” the outage. Nine fuel-nozzle assemblies were replaced in three shifts using four O&M technicians under the guidance of a TA.

The cost saving was significant and prompted HGP to contemplate performing all future combustion inspections with in-house labor. But before implementing an in-house outage program, the following considerations had to be evaluated:

Here’s what the plant staff learned:

Safety. By using plant personnel, many safety issues were avoided. Staff already had a solid working knowledge of “site specific” safety procedures, policies, and issues. Addressing job-specific hazards was HGP’s primary objective. Job hazards included, but were not limited to, rigging and fall protection, already a focus in pre-outage classroom training. These outage operations are monitored closely by a third-party TA and HGP management during disassembly/reassembly. HGP’s safety approach resulted in zero accidents and zero near misses during both CIs.

Training. Prior to the 2017 outage season, HGP engaged a third-party to conduct a 40-hr training program on combustion inspections with the outage team. Operators were instructed gas-turbine theory, rigging, IGV calibrations, torqueing, parts function and familiarity, specialty tool usage, inspection and maintenance guidelines from GEK 107535, and quality control and assurance.

Cost. Combustion-inspection costs vary among vendors—ranging from about $140k to $170k each (not including the cost of hardware, consumables, or parts refurbishment). Note that no crane costs are incurred at HGP because the plant was constructed with overhead cranes. HGP performed two CIs with four O&M technicians, one third-party millwright, and a third-party TA in seven shifts at a cost of $51k per CI (Fig 1). Plant realized a median cost saving of $114k per CI.

Schedule. Self-performing outages allows more schedule flexibility. Plant management is able to shift the outage schedule without costly contractor penalties or contractor unavailability. Outages may be moved slightly depending on real-time market opportunities. The facility is also able to immediately address forced-outage situations rather than waiting for contractors to mobilize.

Experience. HGP has a tenured staff with very little turnover. Combustion inspections are performed every 8000 to 8800 operating hours. During outages, all O&M technicians are assigned to the maintenance department (with the exception of two control room operators). A select group of O&M techs were permanently assigned to the outage team, which meets regularly to discuss ways to mitigate risk and improve overall outage performance (Fig 2). 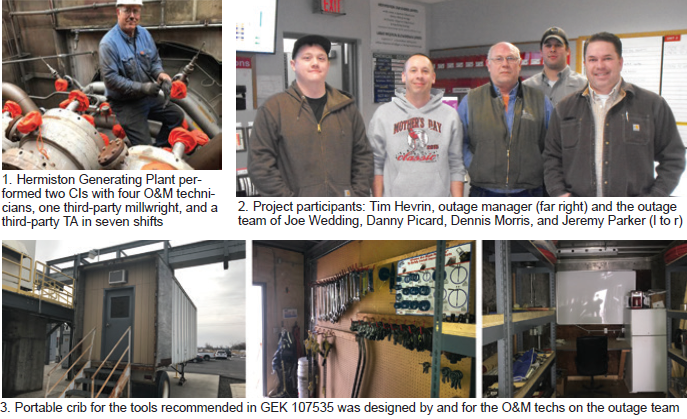 Morale. Staff’s ability to successfully perform planned and unplanned outages has fostered a higher level of confidence, knowledge, and self-reliability among plant personnel.

Tooling. HGP constructed a portable crib for the tools recommended in GEK 107535 . The trailer, designed by and for the O&M techs on the outage team, is equipped with tooling, consumable parts, office space, and break amenities (Fig 3). It is staged adjacent to the turbine compartment during outages.

Parts availability and sourcing. By self-performing, HGP is not restricted to using specific vendors. Purchasing is able to negotiate more reasonable costs and decreased lead times. HGP also carries a large inventory of spare parts. With the familiarization of turbine maintenance, each member of the team is able to quickly identify and procure parts as needed.

Reliability. Strict QC policies and second checks were implemented to prevent oversight. Since implementing the self-performed CIs, the facility has achieved an EFOR of less than 1% and a starting reliability greater than 98% (201 successful starts in 204 attempts) through the end of 2017.

To sum up, every aspect of the self-perform CIs had a positive impact. All future combustion inspections at HGP will be performed by plant personnel. Looking ahead, management is evaluating the need for TA services during the next CI.