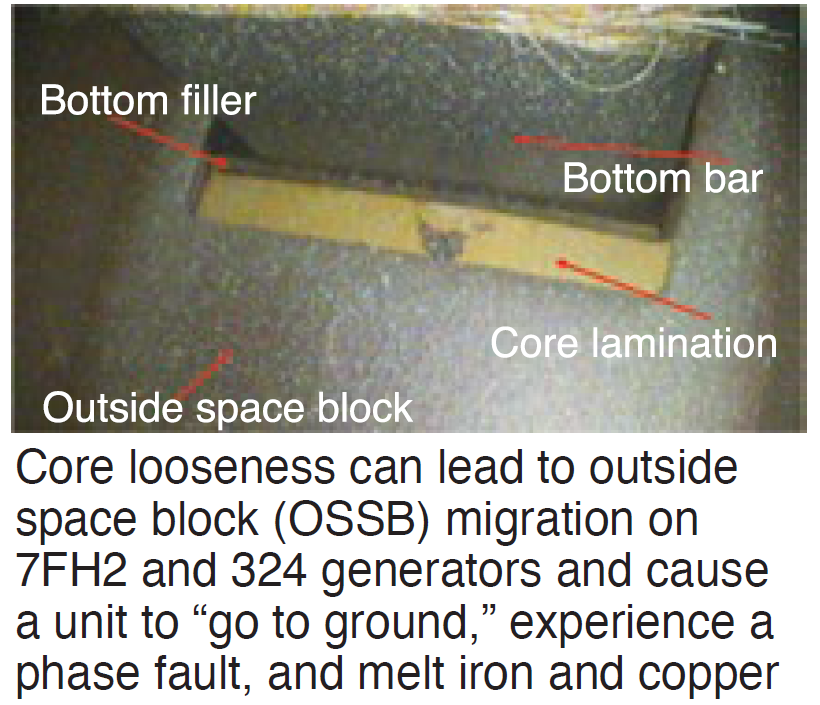 Jamie Clark of AGT Services kicked off the vendor presentations at the 2022 conference of the 7F Users Group, May 23-27, at the Fairmont Dallas Hotel, by addressing stator-core looseness in generators for gas- and steam turbines. Perhaps to jolt the audience awake after breakfast, Clark noted that there’s a “huge uptick” in stator-related problems” and later in his remarks quantified and expanded on his assertion: Generator emergent work during outages is up 30% in the industry for hydrogen-cooled units.

The litany of issues Clark addressed should make users quake in their boots until you realize that “the 7F generator fleet is 20-25 years old on average and the life of a stator is 20-25 years by design.” One big common phenomenon: The whole core gets longer after thousands of cycles, he explained; as you might suspect, peaking and load-following units are most affected.

Most of the looseness is compression-based, not related to vibration or thermal conditions, and “the problems are at the turbine end, not the collector end.”

Owner/operators of the MHI-built 7FH2s (about 50 worldwide) perhaps should be quaking in their boots. These units are “losing teeth and failing,” Clark said, adding that MHI issues “can be catastrophic” and full stator rewinds are required. TIL-2260, addressing these issues with MHI units, was revised in February 2021 to include root-cause analysis findings.

Clark reported data on post TIL-2260 repairs for six MHI turbine ends (TE) and TE coolers that the AGT Services shop was involved with, and found two TEs were missing no iron, one was previously missing iron, and three with AGT repairs had no prior adverse reports or issues. Three of the TE coolers showed 100% looseness at the core outer diameter, for the full length of the core, and presence of iron oxide at the inside and outside diameters. These units required belly-band tightening, stator re-wedging, and full-core re-torquing to 3000 ft-lb.

All GE 7FH2s will show signs of turbine-end iron looseness, Clark stated, and Model 324 units coupled to steam turbines are showing signs of outside space block (OSSB) migration (photo). OSSB can cause a unit to “go to ground, experience a phase fault, and melt iron and copper.”

Why the OSSB issues? Clark explained it with three factors: (1) Axially loose core, predominantly on the turbine end, (2) poor bonding of OSSBs to the core compression flange, and (3) after startups, the core expands radially and axially, tearing the “relatively thin OSSB dovetail out at the keybar. On cool down, the core-compression flange retracts but leaves the OSSB where it was. This repeats every operating cycle. Eventually, the OSSB cuts through the bottom filler and into the bottom bar groundwall insulation, resulting in a stator ground.

Viewing the photos Clark provides in his slides, along with additional material on repair strategies and causes of damage, will enhance your understanding of these issues. His presentation is available to registered owner/operators in the 7FUG Conference Archives section of the Power Users website at www.powerusers.org.