There’s a new test standard for evaluating the efficiency of HVAC and industrial air filters—Classes G1 to F9. ISO 16890, which completed an 18-month phase-in period in June 2018, is the first uniform filter standard for the world, Jason Tiffany, a product development engineer in the Gas Turbine Systems unit of Donaldson Company Inc, told the editors.

“Efficiency” refers to the percentage of particulates a filter actually captures. Until now there were two very different regional standards for air-filter efficiency: ANSI/ASHRAE Standard 52.2 in the US and EN779 in Europe. Users in Asia and the Middle East referenced both standards, as well as others. While 52.2 and 779 aim to measure similar performance criteria, Tiffany said, they do so in disparate ways that defy comparison.

Efficiency conversion tables have been guesswork at best, he added, making it difficult for both suppliers and users of filters to communicate effectively in an increasingly global industry. The introduction of an international standard for efficiency and dust-holding capacity relieves at least some of this confusion.

Tiffany noted that ISO 16890 is not simply a change in measurement language, as in metric versus English. Rather, it’s a way the test is conducted and product ratings are determined. The methodology aims to better represent actual dirty air in the outside environment and report how well various filters clean it.

The new standard focuses on classes of particulate matter (PM) to align with concerns of the World Health Organization and Environmental Protection Agency, and similar national organizations worldwide, regarding hazards to human health. Specifically, Tiffany continued, ISO 16890, measures the average capture of particulates with diameters in these three ranges:

Filters qualify for one of these efficiency classes if they demonstrate, on average, at least 50% efficiency. If a filter fails to achieve 50% collection efficiency in any category, it is designated as “coarse.” A filter’s efficiency rating is reported next to its classification—PM1-65%, for example. It’s a straight-forward rating system. Note that the stated efficiency is rounded down in 5% increments. This means that if the test results showed 67% capture, the stated number would be 65%.

Also important: ISO 16890 recognizes that an electrostatic charge on new filters can provide an initial performance advantage that dissipates over time. The test procedure assures comparison of alternative filters on a level playing field this way:

The table, which compares filter ratings by test standard for Donaldson’s Spider-Web® product line found in many gas-turbine applications, illustrates the value of the new performance standard to owner/operators. Using the EN779 standard, which uses only one particle size (0.4 µm), all the filters listed in the first column appear to have the same performance.

In the US, ASHRAE 52.2 tests a variety of particulates, but its weakness is an imprecise rating scheme. MERV (Minimum Efficiency Reporting Value) ratings from 1 to 16 are meant to correlate with performance—the higher the number the more efficient the filter. However, some data have shown a negligible difference in real efficiency between filters rated MERV 8 and 11, and a big performance jump between MERV 11 and MERV 13.

Tiffany points out that the ISO rating method is designed to be more accurate and provide absolute values, rather than a relative scale. In the table, note the better performance of the XP2 filter compared to the XP filter. Both the EN and ASHRAE tests rated them equal. The additional information allows a user to justify spending more for the XP2 filter if its better performance was of commensurate value to the plant. 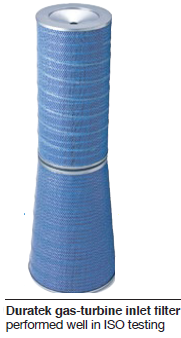 Users are not likely to abandon MERV or EN779 ratings overnight. Tiffany believes there will be a gradual conversion to the new standard as equipment tests are completed. Donaldson, for example, will continue to classify its filters under all major rating schemes until ISO 16890 becomes predominant in the market.

Tiffany summed up the main benefits of the new standard this way: