Intel, the venerable computer chip maker, is often lauded by marketing gurus for its “Intel Inside” stickers. The strategy allowed a supplier of invisible “pieces and parts” to be brand-recognized by the end user.

Emerson’s Power & Water Solutions business might consider “Ovation at your side.” At its annual Ovation Users Group conference, the Emerson leadership, and rank and file, made it clear, without overt reference, that Ovation will be more than control systems, automation, and plant knowledge management; it is evolving into a platform for a variety of enhanced services within a “trust domain” established with the customer (Fig 1).

Jim Nyquist, Group President, Emerson’s Systems & Solutions organization, opened the meeting by proclaiming this to be the “most challenging environment in history for power and water.” He reported that Emerson corporate restructured by selling off one-third of the company over the last three years, even as the firm made key acquisitions, most notably GE Intelligent Platforms.

Nyquist’s most insightful comment, though, was that its Power & Water Solutions business is becoming “a trusted advisor to the industries it serves.”

Robert Yeager, president of that business, as he does every year, next assumed bragging rights, noting that Ovation is now installed on well over one-third of the electricity generating capacity in the US, and close to one-fifth of the capacity around the world.

The group has its sights on a remote monitoring and digital collaboration center, a “collaborative work environment of the future,” said Yeager. When built out, it is expected to anchor enhanced services in cybersecurity, cloud-hosting, remote M&D, troubleshooting by subject matter experts, and real-time control and advisory services to operators and engineers on the customer side.

“The ‘live’ digital twin (not a “snapshot,” Yeager emphasized) means the simulator and plant control system share an integrated database, same DNA, and same engineering tools,” he said. This is what allows “trusted advisors” remote, real-time visibility into the facility, to support the plant staff as necessary and desired (Fig 2). Over 125 embedded simulators, the core of the “digital-twin” concept, are now installed or proceeding through the factory, Yeager reported. 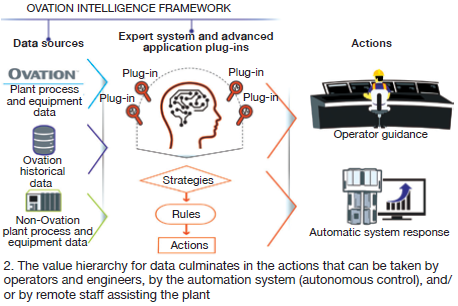 Luke Williams, Executive Director, NYU Berkeley Innovation Lab, delivered the “out of the box” TED-talk type lecture, noting a transition in economic thought from the scarcity mindset to a “non-rival” goods paradigm. He used a lot of concepts from economics and social science to, essentially, describe the “sharing economy” (think Lyft, AirBnB).

“A chair is a thing, but the idea of a chair can be used by everyone,” Williams argued, you can “re-arrange things to satisfy other objectives, to disrupt path dependence and historical continuities.” Message between the lines, perhaps: Emerson is re-arranging the “ingredients” of its Ovation platform to deliver value-added services.

Progress with the Ovation backbone technologies was delineated by Steve Schilling, VP, Technology, including:

Emerson recently invested in Dragos, a Hanover, Md, cybersecurity firm, and its CEO, Robert Lee, kicked off the second morning’s general session. His main theme was that owner/operators have to transition from relying solely on passive defenses against cyberattacks to a more active defense based on intelligence-informed actions. Adversaries, he said, set the stage for attacks months and years before they actually occur. He distinguished between intrusions, like phishing emails, and an incursion in which the adversary steals the information that assists in the later attack.

In one case overseas, Lee said, the adversary was able to install new logic into the safety system controller at a petrochemical complex. In other words, the adversary pre-staged malicious software on the DCS three years before the attack occurred in 2017.

In another event, the adversary spent six months “learning” the industrial environment, developed electric transmission capability, installed protocol-capable software, created malicious services, and coordinated action via a timer to de-energize a critical substation. While the entity responsible for the substation claimed it was “back up” within six hours after the attack, what they did not report was that they were operating in manual for six months afterwards.

Yet, despite these events, he noted that defending industrial systems is in a much better place than people realize.

Consistent with the overall emphasis on services, Wagner stated that Ovation experts can help on the front end as well, such as delivering return-on-investment analyses for contemplated upgrades and retrofits.

Minutes matter. That’s true in obvious situations, like when someone is shot, injured, or having a heart attack. It’s also true when capturing additional value in the organized electricity markets. One presentation described successful results leveraging Ovation controls in eliminating 20 minutes from the gas-turbine start cycle by implementing the HRSG purge credit.

Of the three general options described in National Fire Protection Association NFPA 85 (2015 edition), the one selected (Fig 4) was retrofitted in a week during a 14-day steam turbine/generator retrofit outage, with $170,000 additional revenue expected. The project included replacing six-year-old duct-burner controls, adding an air skid to monitor pressures, adding a third vent valve to the duct burner, and a third vent valve and second block valve to the gas turbine. Programmable logic controllers (PLCs) were replaced with redundant Ovation OCC100 controllers. 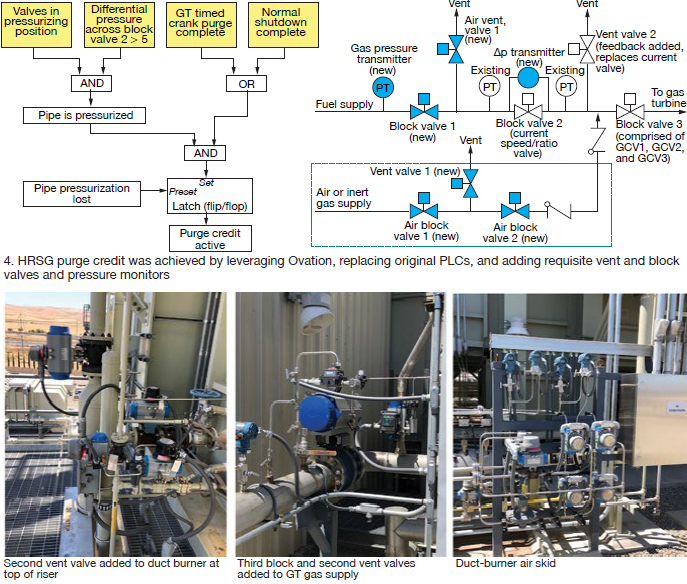 According to a representative knowledgeable about the plant, they “never know when the next dispatch will come.” The facility experiences 250-300 starts annually, has to hot-start within one hour, and cold-start within three hours, or pay up to $300,000 in penalties. Thus, avoiding penalties is worth more than gaining revenue.

Not as easily calculated is monetizing the reduction in thermal stresses on the HRSG, a design which includes two superheaters, but no reheat section. Plant reps estimate a factor of 10 reduction in hot/warm start contribution to superheater fatigue. Importantly, the retrofit moves superheater repairs out of the 10-year PPA window. As well, a three- to five-factor reduction in fatigue damage to the steam drum, downcomers, and outlet nozzles was calculated.

There is also a reduced risk of water hammer and low-cycle fatigue damage now that less condensate is produced. The original condensate removal drains were not sized for the operating modes the facility currently experiences, in other words, not for frequent starts and purge cycles.

Beyond training. Three users presented on how they have used their Ovation embedded high-fidelity simulator and benefits therein. One of the facilities, a combined cycle, is new, experiencing “first fire” the week of the Ovation confab. Note that none of the three is yet being used as a “live” digital twin.

Uses and benefits include the following:

No operator, no dog. Even two decades ago, automation specialists joked that in time, only an operator and a dog would be onsite at power stations and the dog’s job was to keep the operator’s hands off the controls. David Cicconi, Emerson Turbine Business Development Manager, reviewed a variety of technology enhancements now available to completely monitor and operate a multi-unit simple-cycle gas-turbine facility, even ones with HRSGs for cogeneration, remotely, with no personnel dispatched unless issues arise.

Cicconi distinguished a remote start from remote operation, stating that the former involves, among other things, personnel dispatched to the site for continuing operations and limited intelligence available following a failed start. Many other industries are already running complex energy systems remotely, such as unmanned mine sites, he noted.

Categories of enhancements covered include these: 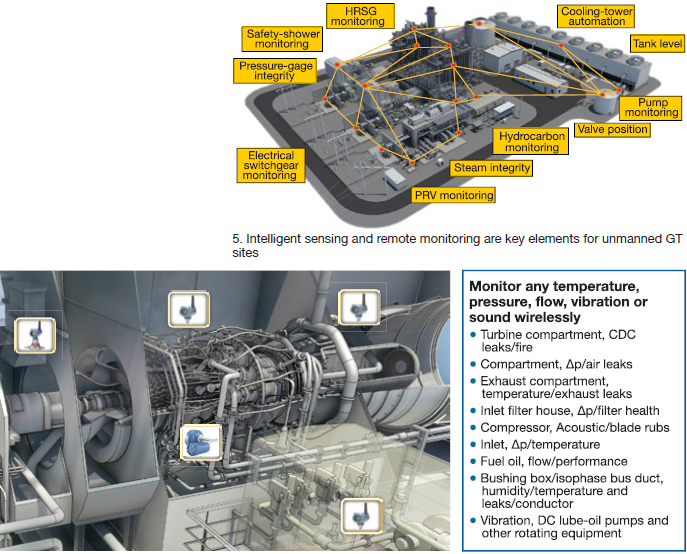 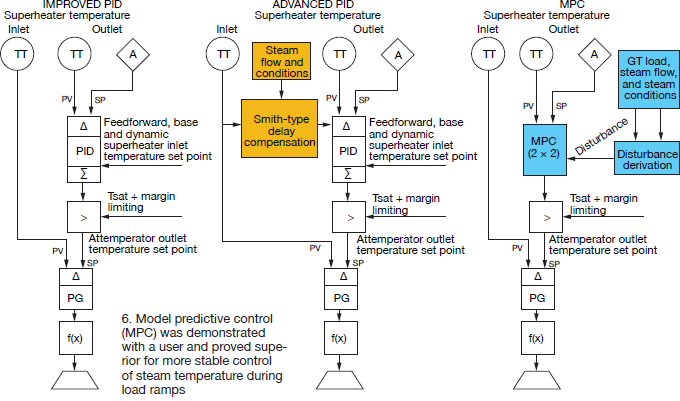 The benefits are as follows:

Fewer rounds. Emerson’s Business Development Manager Juan Panama offered a compendium of technology applications to “build the utility of tomorrow.” Perhaps the most eye-opening one is to significantly cut operator rounds and make better use of limited manpower by installing wireless devices at all points where data are now taken manually. One combined-cycle site estimated that it could avoid 58 man-hours per week per power block in applying this approach and keep staff more focused on the important business of repairing what the sensors detect.

Panama also noted that Emerson offers a device that connects to any wired device to convert it into a wireless device, allowing additional HART information to be collected.

Other ideas (those not covered in earlier presentations) include remote monitoring for continuous operation of critical valves, especially around the steam cycle; wireless acoustic listening devices to detect the onset of HRSG tube leaks; wireless corrosion and erosion monitoring in areas prone to oxygen pitting and flow accelerated corrosion; wireless pressure transmitters to give insight into when tube bundles show signs of fouling; and continuous electrical condition monitoring on equipment rated less than 40 kV.

The last could eliminate the need for periodic IR measurements on live equipment with personnel in arc-flash suits, third-party partial discharge testing, and heater and insulation failures in isophase bus ducts.

Panama provided some rough estimates showing that sites in the low end of maintenance costs—ranging from $3.53/MWh in the top third of performers to $8.59 for the bottom third—apply many of these latest technologies discussed.

Your long-lost twin. You may not know it yet but your Ovation system could have a twin, a digital twin, the real-time “live” version of the Ovation embedded simulator when it is pulling data from and synced to the control system database. Emerson’s James Thompson and Shen Zhang provided an update on digital twin technology, noting that 180 models in eight “suites” (base, electrical, turbine, flue-gas desulfurization, selective catalytic reduction, combined cycle, boiler, and balance of plant) have now been validated and included in the algorithm library.

Without repeating the benefits and tools available from what was mentioned previously, the digital twin capability is being integrated into the Ovation services model, especially in its Emerson “cloud-hosted” configuration, meaning it is entirely offsite in the Emerson-controlled cloud. As such, it becomes an engineering simulator with the attendant fidelity and graphical realism, as well as the platform for real-time process and controls optimization (for example, root cause analysis and upgrades), autonomous control (instead of operator assisted control), and loop testing and validation.

As the presenters stressed, full-scale adoption of the live digital twin will require maintenance beyond just keeping the simulator updated and synchronized with the control system. Consideration will have to be given to cybersecurity, NERC-CIPs regulatory compliance, recalibration of the models to gain higher fidelity, and installing additional sensors in plants that are not properly instrumented or want to generate additional data for higher-level prognostics tools.