John Chaya, operations manager at Cogentrix’ Rock Springs (Maryland), reports that the installation by Turbine Controls & Excitation Group Inc (TC&E), Denver, Colo, went “as expected,” testing proceeded with only the normal number of “bugs” to sort out, and all machine starts since Nov 8, 2019 have been successful. All acceleration and ramp rates were matched to the original OEM specifications.

All four 7F peakers at Rock Springs (commercial in 2003) will soon be served by two DFE LCIs, with the second unit install to occur this year.

Chaya notes that the motivation for the retrofit was that the majority of unit unavailability was attributed to the LCI. The precipitating event occurred in October 2017 when two units were out of service for 12 hours. Obtaining spare parts was becoming an issue as well. The units experienced 120 starts in 2019, mostly in the summer.

“The TC&E/TMEIC team was very professional and did the work in the time frame promised,” The timeline was three days for component changeout, two days for testing and commissioning during the 2019 fall outage. 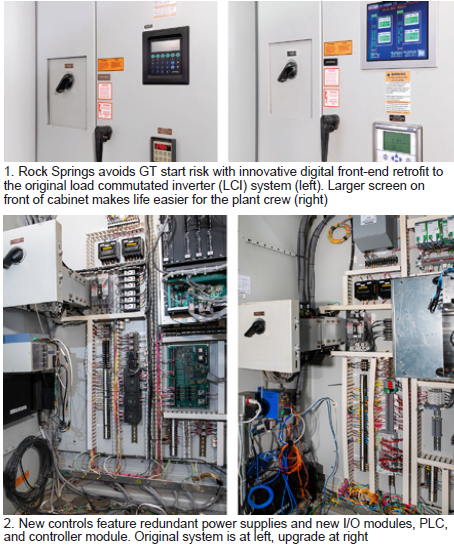 Other benefits attributed to the project by Chaya: startup procedures remained the same and the electronics and interface screens are much larger and easier to read (Figs 1 and 2). One piece of advice he offers the next users: Be sure to request training for troubleshooting, even though “it’s pretty intuitive to get through the manuals.”