Thursday’s program was intense, with four 90-min sessions conducted in parallel tracks for 4000F and 2000E owner/operators. Each track featured one session on mods and upgrades (M&U), one on engineering, and two closed sessions for user-only discussions. A 30-min skull session allowing Siemens Energy engineers and users to sort out sticking points identified over the four-day conference completed the technical program. A closing reception offsite followed.

The M&U sessions in each track began with a fleet update, good for benchmarking and for seeing how your plant compares to others in terms of equipment capabilities.

The SGT6-4000F began life in the US as the V84.3A frame as the 1990s drew to a close. Over the next several years, improvements extended the basic engine’s capability from about 165 MW to nearly 200 MW in 2013 with the introduction of Service Package 6 (a/k/a SP6)—featuring a thermal performance upgrade and improved hot-gas-path parts. SP6 benefits from earlier upgrades, such as 33MAC (33,000-EOH interval), introduced in 2009 with its improvements in coatings and airfoil geometry and cooling.

Next on the list of improvements was the burner upgrade introduced in 2018 to reduce NOx emissions. Designs of the pilot and premix burners were improved to reduce local flame temperatures; premix flames benefitted from improved stability as well. A reduction in cooling-air consumption in the combustion chamber also contributed to lower average flame temperatures.

Part-load optimization was an important part of the presentation and very practical because this analysis makes use of real site boundary conditions—including current load profile, emissions requirements, and gas-turbine, HRSG, and SCR upgrade capabilities.

There were several slides on fuel flexibility—including guidance on the possible addition of liquid-fuel capability to a unit burning only gas. Next came a look at requirements necessary to accommodate burning varying percentages of hydrogen mixed with pipeline gas.

Siemens Energy’s goal of continuous improvement suggested a progress report on the company’s Advanced Turbine Efficiency Package (ATEP), the development of which is currently focused on the SGT5-4000F engine. Its goal is to increase the efficiency of the current machine by up to 1.5% and boost power output by up to 40 MW. Advanced materials and ultra-efficient internal cooling and sealing of critical parts are among the improvements expected to deliver on the ATEP promise. Four ATEP units have been sold for EU deployment, two for Asia. First fire was planned for summer 2022 at the time of the V users meeting.

Update: In September 2022, the first-time application of ATEP at the Enecogen combined-cycle plant in Rotterdam, Netherlands, was completed as planned. Early performance indications show outstanding values, according to Siemens Energy. Data from the extensive measurement campaign are under evaluation. The OEM expects to present results of its analytical work to the 4000F community shortly.

Engineering. The first presentation in the engineering session described Siemens Energy’s efforts to review its global supply chain with the combined goals of identifying opportunities to improve the lead time for repairs, consolidate technologies, and reduce the strain on critical facilities.

Wet compression got attention for its ability to add up to about 12% power output on demand when ambient conditions are “right.” System was tested at one customer site in June 2021, producing a power gain of 25 MW with 101 gpm of wet-compression flow and a compressor inlet temperature of 90F.

Sliding fuel-gas pressure operation, discussed next, likely is of greatest interest to those users desiring more efficient fuel-gas compressor operation. Attendees were reminded that when gas pressure is too low, operators receive a warning before a gas-turbine trip is initiated. Also, that fuel-gas pressure is not required all the time because of varying operating conditions.

These three possible solutions are described in the presentation:

Experience with the M77 ceramic heat-shield material followed. It is more durable than the M100 material being replaced in some areas of the combustion chamber. The group was told that SiCerm M77 has a higher resistance to hot-gas erosion and subsequent material erosion during engine operation. It is recommended for the last rows in areas susceptible to erosion. Reduced scrap rates and maintenance effort are among the expected benefits. Less material loss in the combustion chamber also reduces wear and tear on turbine-section blades and vanes.

Rotor-Casing Inspection and Evaluation is always a topic of interest at V user meetings. The speaker stressed that RCIE is a customized approach based on unit operating history. Case studies were offered for baseload engines with up to 200,000 EOH and less than 3000 starts and for peakers with less than 6000 starts.

Presentation reviews components affected by long-term operation, the damage mechanisms expected (creep, etc), and fleet experience. Then current solutions for repair/replacement of affected components are identified along with a look at solutions under development.

One of the conclusions of Siemens Energy’s work: “Statistical results have shown lesser need for replacement of casing and rotor components for baseload engines while experience with peaking engines is still limited.” The speaker continued, saying that with changing markets and more demanding operating regimes, findings (and the need for component replacements), may change; also, that the OEM’s programs are updated based on experience and the latest analytical results.

Brownfield engine exchange (BEX) is on the Siemens Energy agenda at many user-group meetings. The idea is to increase powerplant efficiency and operational flexibility, and reduce emissions, by replacing an existing engine with a new one, perhaps performing selected upgrades on other equipment in parallel. The “carrot”: Less than the cost of a completely new plant. 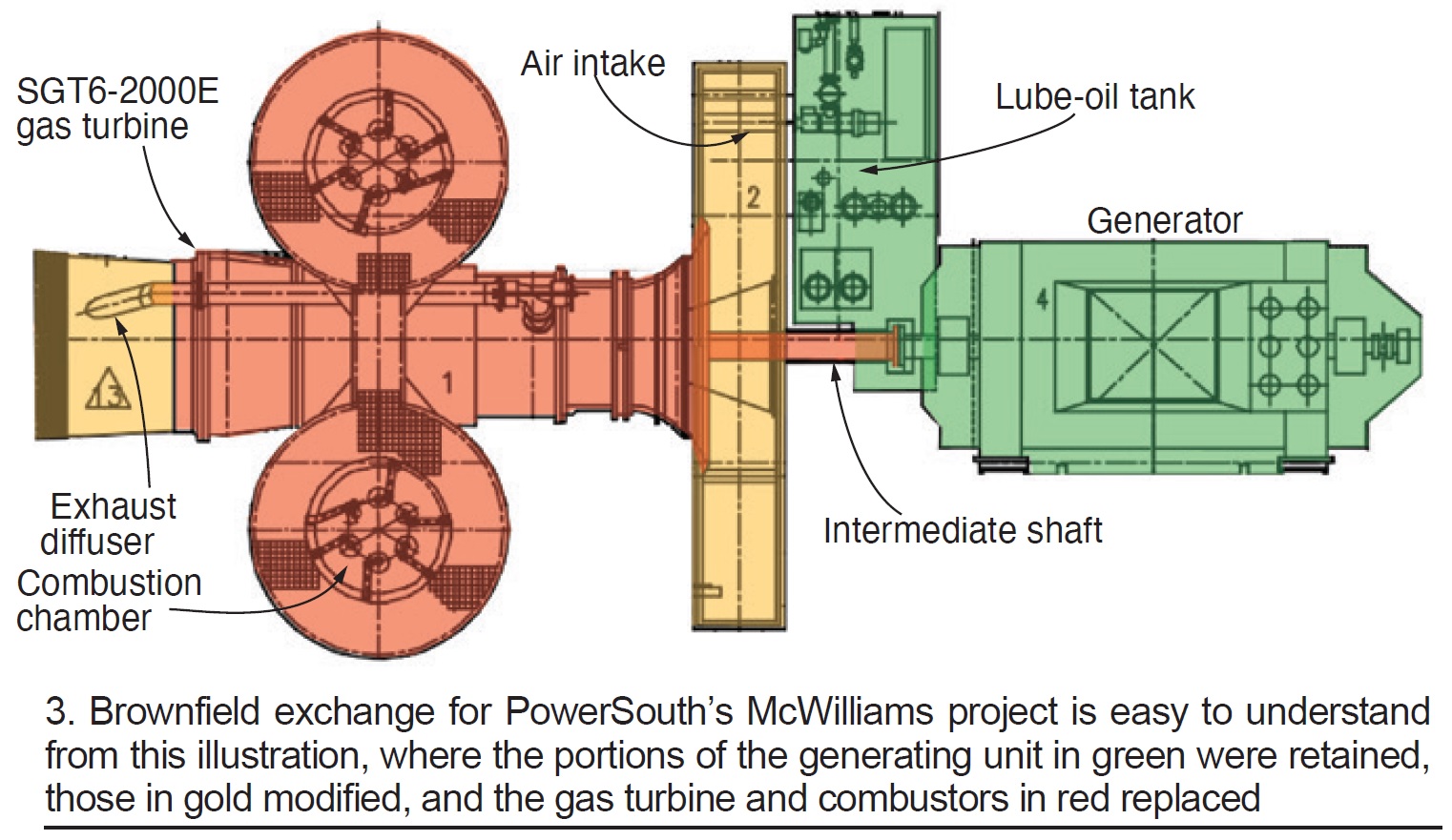 The OEM’s global BEX program has been successful, with 40 units participating in 10 countries—21 of them in Taiwan. BEX is not specific to the SGT6-4000F. In fact, there are no upgrades of this frame on Siemens Energy’s reference list. However, four V94.3x machines have been replaced with 50-Hz 4000F engines. 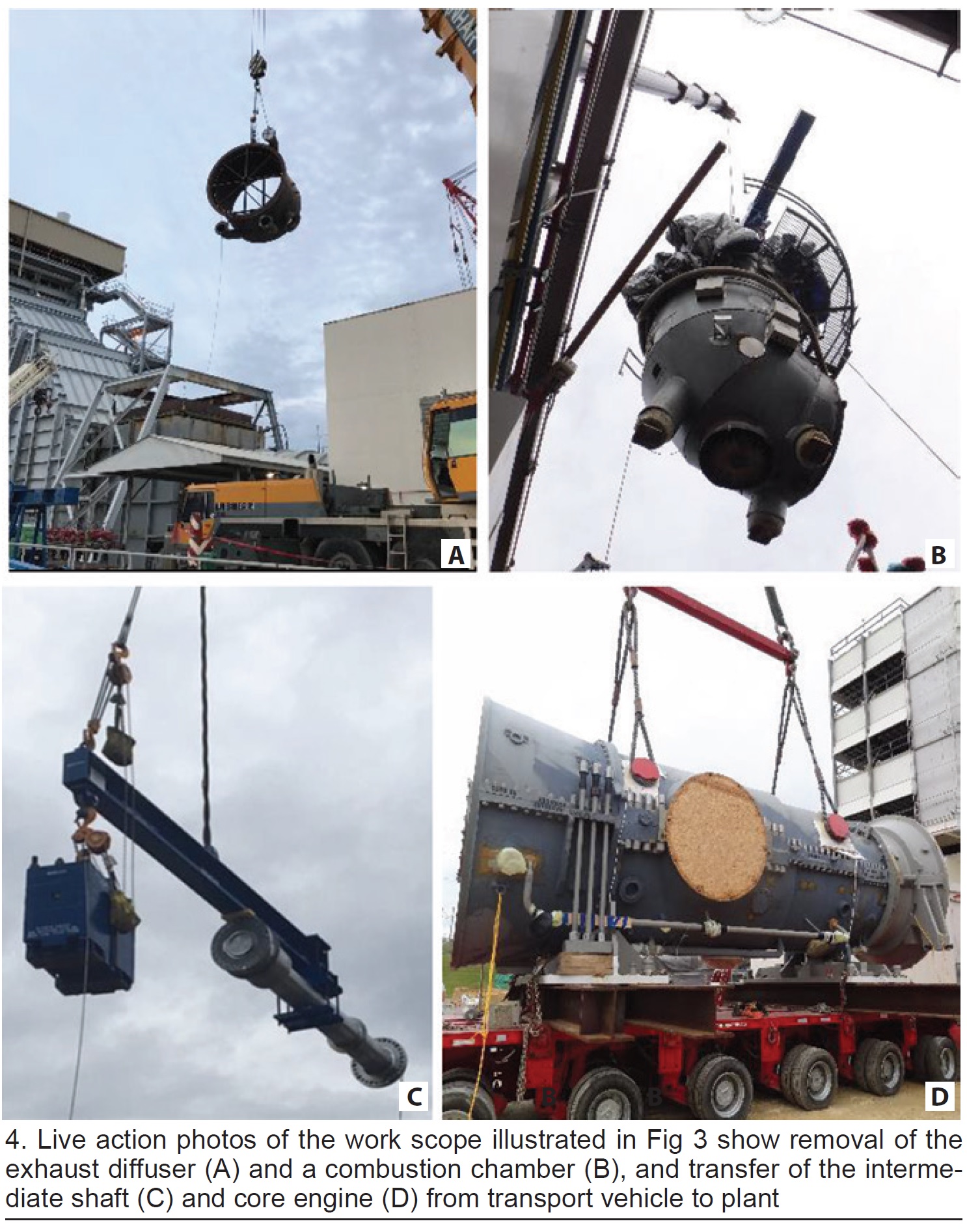 Improvements in the engine’s gross simple-cycle efficiency from about 31% to 35% over the years made replacement more economically attractive than continuing to change parts and do regular maintenance upgrades. Plus, NOx emissions were reduced to 10 ppm from 13-16 ppm.

Major work on this project, the first-of-its-kind here for the OEM, included the design/manufacture/installation of a new intermediate shaft between the turbine and generator, and modifications to the air-inlet house and exhaust diffuser—in addition to replacing the gas turbine, of course. The original generator remained as it was.

Paint update. Final topic on the program was a repair paint, in validation at the time of the conference. Use of the two-component epoxy resin was to address leading-edge coating abrasion on the first few compressor stages. The coating can be applied during a minor inspection.

5. On the minds of users